An extra $260K in potential profit?

First off…… I can’t believe this happened! When I first contracted the  property I just figured this would be another typical purchase and resale, but it didn’t take long to realize it was going to be anything but normal. We got the call late in the afternoon, a friendly gentleman who called from one of our pre-foreclosure mailings, and he was looking for options to stop his foreclosure and get a little extra time in his home to pack and move. This type of call is not out of the ordinary, but it seemed like the home owner was ready to sell.

After asking a few open ended questions we found out the home was recently remodeled, including JenAir commercial appliances, and an addition to the kitchen that added approximately 400 sqft of livable space. Now I have spent enough time on the phone with sellers to take what I am told with a grain of salt, especially when I am told how “lovely” the home is, but the home owner was very detailed about the work he had recently done.

Looking at comparable homes of similar size and shape that recently sold would put the resale value of this home around the $515k range so we asked the inevitable question…. How much are you asking for your home? Without much delay we quickly found out that he was ball parking in the low 300’s so we went ahead and set the appointment for that evening.

When I got to the house, the exterior of the home lacked some curb appeal, but overall was in a reasonable condition. As I walked up to the front door of this 1930’s pier and beam bungalow I was hoping to see that the inside was in as great shape as the owner had described. A taller, clean cut, slender gentleman came to the front door, semi nervous, but appeared to be pleased to see me. He had several puppies ranging in breed and size that all had a story of their own, but as we toured the home I was quickly pleased to see that everything he told me about the home was true. Refinished hardwoods, remodeled modern bathrooms, nicely laid out floor plan, and an inviting open kitchen full of custom cabinetry.

We sat down at the kitchen table to discuss different options for getting the foreclosure stopped, and we discussed what he needed so we could make this a win win for all parties. Looking at the house it really needed minimal repairs, maybe $1,500 in foundation, and some curb appeal in the front yard and it was ready to retail for $515k. I made the seller 2 offers, $276k cash or $320k minus past due payments if he would allow me to take over his payments for a short period of time. After a long while at the table we agreed on a two month lease back, and purchasing the property for $320k minus all liens and past due payments, subject to the first lien, and with a second lien for the seller’s equity on a 6 month, no interest, balloon. So I pretty much got the deed to the house for zero out of pocket by using a private lender for the arrears, and on the next Monday morning I sat at the foreclosing attorneys office with a check in hand for all past due payments to stop the foreclosure sale.

Talk about excited. I pretty much just picked up a $515k retail ready house for $0 money out of pocket! My original intent was to allow the previous owner to stay for the 2 month lease back, make some minor changes to the home, and then resale the property on the MLS for a pretty hefty profit, approximately a conservative $140k or so after all retail fees and holding costs.

Well it was a total surprise, and not planned in the least. I was actually wholesaling another house, and when I met with that investor to assign the contract we began discussing other properties I had in my pipeline. When I mentioned this particular house his ears perked up just a little. This investor had actually just finished remodeling a house on this exact same street and was listing it for sale that week for almost $2,000,000!

See there is something I left out at the beginning of this story. My subject property was only 1,537 sq-ft, but there were much larger 4,500-5,500 sqft homes selling for well over 1 million in the same subdivision. When I was doing my analysis of highest and best use for the property would be to bulldoze it and build a new house, but my opportunity costs for taking on that type of project on my own was too high. But, with the right strategic partner, this deal took on a whole new light.

With acquisition costs of the land being all in around $340k, and the costs to build a new 5,300 sqft home being around $640,000 our all in costs would be approximately $980k. The homes in this area of similar build and footage would set this property to retail around $1.5 million and leave an approximate gross profit of around $500k – a $260,000 increase over our initial projected earnings! 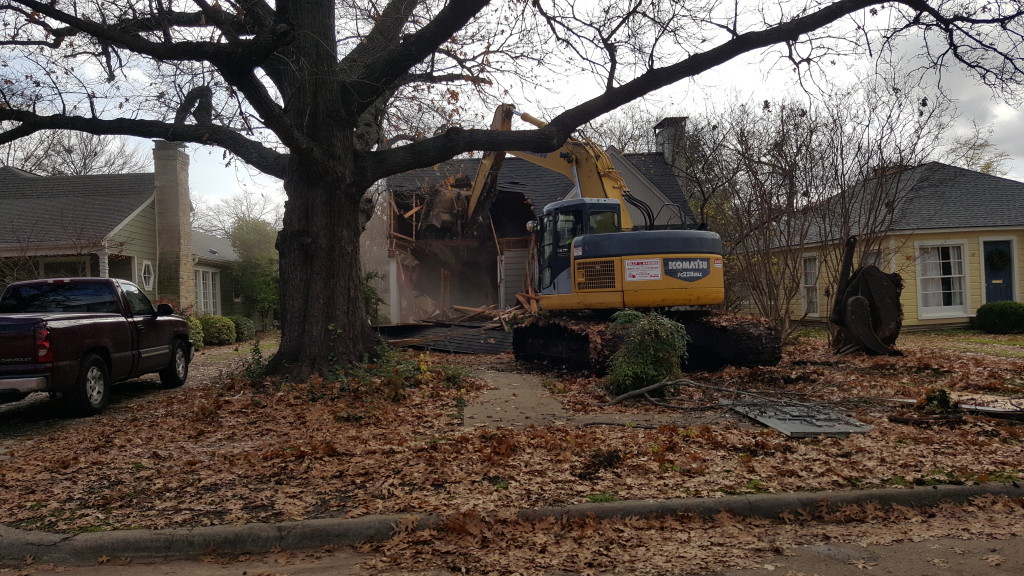 I used the time during the temporary lease to iron out the details of the project, get the architectural plans drawn, foundation engineered, and city permits approved, but on December 16th 2015 I bulldozed a perfectly habitable $5155,000 house to bring in a new era in my investing career.

Follow the progress of this build as I release updates and as construction continues we will release more detailed articles outlining the construction process and the success/struggles we encounter on the way. Any questions let us know in the comments below.